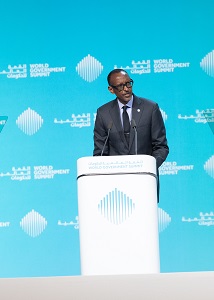 Pakistan Prime Minister Imran Khan spoke of a new era for investment opportunities in the country as it seeks to unshackle itself fromthe corruption that hasmarred its reputation for many years.

Paul Kagame, President of a resurgent Rwanda, said Africa could realize its full potential by becoming one united continent. “Young Africans must be given a real stake in the future of their continent,” he said, as he addressed a brimming plenary hall at Madinat Jumeriah.

At the start of the week, leadership expert and entrepreneur Tony Robbins announced he is collaborating with UAE leadership on a humanitarian project to feed one billion people.

Talking to CNN’s Richard Quest, IMF Managing Director Christine Lagarde candidly said artificial intelligence will drastically reshape the future of jobs and human intelligence, adding that even her own job will be “adjusted” in the future.

And just a week after the first ever Papal visit to the Arabian Peninsula, Pope Francis addressed the summit via a live video, where he said the UAE has started a new historical chapter in a modern, tolerant world.

The three-day World Government Summit 2019 runs until February 12 at Madinat Jumeirah in Dubai. The landmark event convened more than 4,000 participants from 140 countries, including heads of state and governments, and top-tier representatives of 30 international organizations.